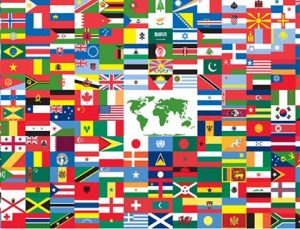 This can be seen in the era before the First World War when we saw for the first time a real rise in globalisation.  For example, there was mass migration from Europe to America, trade grew from 5.9% of global GDP to 8.2% and capital was flowing freely with new railways and steamships. However, this period of boom for globalisation was replaced with a boom for the nation state because of the First World War. Countries became increasingly isolated, trade was down and nationalism was on the rise.

This cycle of globalisation then nationalism has continued since then. There was a period of nation state importance during the Cold War when distrust was high but then a thaw and globalisation took hold. Institutions such as the UN, NATO and the EU were established which brought Countries closer together and migration picked up. However, recently there has been another boom of the nation state over globalisation after the terrorist scares in the early 2000s such as 9/11. There has been a growth of national allegiance and national identity matters more than ever for people determining a sense of who they are. There has been a rise of parties such as UKIP, the French National Front or the Alternative for Germany which all advocate the importance of the nation state over globalisation.

On top of this, Trump has been elected whose isolationist policies such as the Mexican Wall or the travel ban on 7 Muslim countries or his trade war with China highlight the rising nationalism of the voters. Of course Brexit is a prime example of the rise of nationalism and the nation state as it represents a want to call back sovereignty and withdraw ourselves from an organisation that is the epitome of globalisation.

So, in my opinion the pendulum is always swinging from globalisation to the nation state and at the moment we are experiencing a turn in favour of nationalism and the nation state.