Skip to content
Cranleigh School Blogs / Politics Department Blog / UK Politics / What did we learn from the Conservative Party Conference? 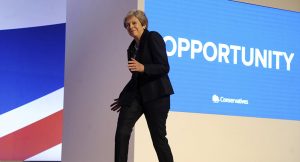 During my first year of teaching, I was given some excellent advice by my mentor at the time.  There is a time and a place for having a ‘fun’ lesson, and sometimes these can be worthwhile, for instance if you are worried that the students all hate you.  What you have to remember though with a ‘fun’ lesson is that the students won’t learn anything at all. The only thing they will remember is the ‘fun’ things that you do.

My first reaction was to sniff at this advice.  Surely I could do lots of fun things which would help the students relate to the course material in different ways and enhance their learning, whilst also making me a pretty cool teacher!  As it turned out, this advice was pretty solid. After having acted out the Schlieffen plan with my 4th form set, and recreated a ‘creeping barrage’ using board pens, I was surprised to find out that the only thing they could remember a week later was how the person playing ‘Belgium’ accidentally tripped over a chair, and how one of the pens from the ‘barrage’ was thrown out of the window!!  The less said about the lesson on Gallipoli taught in a ‘Wallabies’ shirt entirely in an Australian accent, the better.

I believe that this advice should also be applied to major speeches at Party conferences, after seeing Theresa May’s attempt to rise like a Phoenix from the flames following the disaster of her 2017 conference speech.  In 2017 she lost her voice, had to deal with a stage invader offering her a P45, continued to cough throughout her speech and then had the set fall down around her as she spoke. This year though, her team agreed that the world needed to see the lighter side of Mrs May.  To the sounds of ABBA’s seminal hit, ‘Dancing Queen’, The Maybot trundled on showing about as much dance-floor grace as a giraffe stuck in a cattle-grid. May then continued her robotic “Bambi on ice” impression for the rest of the song, whilst Ministers and MPs applauded through grimaces.  And then she commenced her speech…..

The thing is, a week on from this, all I can remember is the dance.  Yes there was something about austerity ending and a few jokes at Corbyn’s expense, but really all that anyone can remember was the ‘fun’ part.  This was a crucial speech. Britain is on the precipice of Brexit with, Labour, Brussels, remainders, brexiteers and the DUP marching forward with swords drawn.  Theresa May desperately needed the speech of her life to unify her party and give the nation confidence that she can pull of the deal of the century in the next few weeks.  Unfortunately the only thing she was able to deliver was some fantastic meme material for YouTube that Politics teachers can continue to play to their classes for years to come!

There is a time and a place for ‘fun’.  A party conference a month away from crunch talks on Britain’s future isn’t really the time or the place!