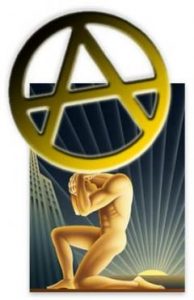 Hugo’s recent post regarding the merits of anarchism, or at the very least ardent libertarianism, made for good reading (if one could tolerate the errors of spelling and grammar). But alluring though a world without government and all its irritating and often petty rules may seem, a human world without government is neither desirable, nor possible. Humans will always tend towards some form of collective political organisation – government – no matter what their situation. Hugo may lament the modern state, but the modern state is simply the high water mark of political organisation that has arisen since the dawn of mankind. It is the largest and latest aggregation of sovereignty from a starting point of small-scale tribal organisation. And it makes us obey laws that prevent us from killing each other.

Humans will always organise politically. Locke was right that “where there is no law, there is no freedom”, and humans given the choice will always enter into some sort of contractual governmental arrangement. Let me give you a living example: the Lagos rubbish tip.

Yes, the rubbish tip in Lagos, Nigeria, where the trash of a vast and sprawling African metropolis is daily dumped, and where a large community of scavengers eke out a living scrounging for tradeable cast-offs – metal, rubber, and so forth. They live on site, in shacks built from refuse. It looks from the outside like an anarchic place, where the writ of the law does not run. And this is certainly the case regarding the Nigerian state law – there are no policemen on the rubbish tip, and apparently no political authority whatever.

And what happens in such a lawless place? What generates itself among this band of bottom feeding rabble? Government! They vote in a chairman; they have a council of wise men; they enact strict rules. If you steal from another tip dweller, for example, you are sentenced by their court to exile from the tip – a fate worse than death in their world. Everyday disputes are brought to arbitration before a panel of elders – judges, indeed – presiding next to festering piles of garbage. Collective issues are debated in an open assembly similar to a legislature, and common agreement is reached and thereafter enforced. Law arises, in other words. A free market economy also flourishes. There are shops all over the rubbish tip, providing anything from meals to haircuts. Any theft or dishonesty in trade and commerce is quickly punished. It is a fascinating example of spontaneous political organisation, and if you can find “Welcome to Lagos” episode one online, I heartily recommend it.

That’s what humans do. They do government. Locke was right all along. I’d rather live in a rubbish tip than in anarchy, for all the tedious rules and traffic lights I have to accord with.