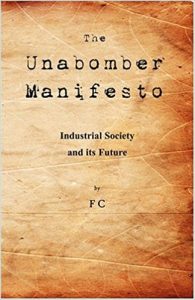 From a young age, we are all taught that democracy and capitalism are the best (and only) system of government that can maximize civilian livelihood. By and large, I buy into this belief, as i have benefited from this political superstructure immensely, however I recently read “The Unabomber Manifesto” written by Ted Kaczynski which argues the complete opposite. He believes that the best form of government is no form of government at all!

If I asked you to put a numerical value on the number of people worldwide that make the decisions that ultimately determine how we live our lives, how many would you say? Realistically, there aren’t anymore than 500, definitely not 1,000. Therefore, by definition, as every day citizens, we have our liberty restricted as the decisions that ultimately effect our lives the most are made by a small number of governing individuals, who are provided this right through our “idealistically perfect system of government.” Kaczynski uses the following example. Imagine you are driving a car late at night, you pull up to a crossroads and the light is red. There are no other cars, yet you do not precede until the light is green. You do not act in this manner because it is against human nature, not is it perfectly rational, simply the current of system of government has restricted your civil liberty by introducing meaningless regulations, while making you belief that individual livelihood has been maximized!

He goes onto to outline other areas of society we pursue subconsciously, such as religion and other “activities”, as we unanimously search for a sense of fulfillment that Kaczynski believes the current system cannot provide us as individuals.  As a result, the only viable system of government is the Kaczynskian Model, whereby no civil liberties are prohibited and full freedom of choice is afforded to all member of society universally. No longer would we search for subconscious fulfillment through the medium of irrelevant activity that by in large have no great effect on the world around us. Undeniably, the world population we would feel exceedingly more “fulfilled” than under a system of government (liberal democracy) that has systematically restricted civil liberties for the continuation of the industrial era.