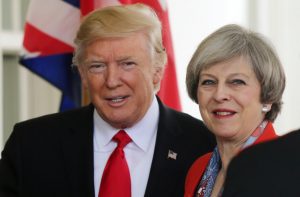 A defence of constitutional monarchy was made in a recent blog post in which the author deftly argued that it is the nature of the monarch’s irrationality that keeps the modern nation-state on the straight and narrow. Simply put, the blog implied that 3rd Reich-style megalomania would inevitably ensue if Britain lost her hereditary monarch. My problem with this assumption is twofold. Firstly, I would contest that it is completely theoretical and unsupported by historical precedent. Secondly I would agree that the British Monarchy has got the ceremonial power, but that this popularity has subsequently rendered our elected leaders devoid of any political power.

Let me make something perfectly clear from the outset. Republicanism does not lead to lawlessness and dictatorship. Reference was made to the American system as an example of Republicanism “gone bad” but – and I hasten to say that I am definitely not a Trump apologist – the American system has not failed. Many things in America have failed. The constitution maintains ridiculous rules that should not be upheld (gun ownership) and the president is a raving lunatic but the federal government system still works. Absolute power is withheld from the President by a system of checks and balances and the media really does function as a 4th estate in the USA.

The author also refers to Franco as historical precedent stating that it was the return to the monarchy that set Spain back on track politically speaking. The problem is that, in using this argument the author has neglected to remember that Franco was, in no sense, a rational leader. He was not elected but rather stole power from the democratically elected government during the Spanish Civil War. I find any assertion that Franco’s revolution would have been stopped by the existence of a constitutional monarch highly doubtful. Indeed, most examples of a dictator rising from the ashes of democracy can be explained by the simple fact that the 20th century has experienced more warfare than any other period in human history. You must separate the political system from the circumstances of its downfall. It is not a failing of the ideology of Republicanism that the Weimar Republic was replaced by the Nazis, for example. The Versailles Treaty must take the blame for the nascent government’s failure, not a fundamental flaw in its nature. History is littered with examples of genuine functioning republics. Germany, France and the USA are all examples of nations that have removed themselves of the shackles of monarchy and – after some teething problems – have emerged as functioning democratic nation-states.

My final point deals with the crux of the author’s argument – the assumption that prestige is – somehow – a negative quality for democratically elected leaders. My contention is that the British monarchy renders our government utterly toothless on the world stage. Whilst unfettered “personality cults” undeniably lead to disaster (see Germany 1933 – 1945 and Russia 1917 – present day for details) I don’t understand why having a democratically-elected leader with ceremonial and political power would be anything other than a boon in Europe and elsewhere.

One only needs to look at the fiasco of Brexit “negotiations” to see that the current British government has about as much foreign policy footing as a two legged cat on a moving car. Whilst the Royal Family is revered across the globe our politicians founder and stutter to make themselves heard at the negotiating table. There are, of course, many other factors at play in the Brexit negotiations but our politicians simply have not been able to exert sufficient influence. Ultimately it must be concluded that prestige and ceremony cannot be separated from political authority. I firmly believe  that “President May” would have been able to lead negotiations far more effectively. By combining the democratic and ceremonial spheres of politics Britain might have come out of Europe in better shape.

There is also the issue of public interest. The Royal Family keeps the British public fixed on mundanity like a toddler staring at jangling keys. The Kate/Will/Diana sagas fill our papers and magazines with apolitical gibberish that shifts our gaze from Brexit and keeps our politicians un-scrutinised. What if our Prime Minister’s cabinet was afforded the same interest as the most recent royal wedding? As long as the Royal Family sits atop the British political tree it keeps the focus away from changes of far greater import.

In summary, if Britain ever wishes to make herself anything more than a nation from a bygone era, she must replace her obsession with tradition and the political irrelevance of our Royal Family. The world is entering its most challenging phase and Britain’s voice needs to be heard again. The real truth is that Republicanism can work and has worked but the prospect of real change scares those among us who would rather halt the wheels of progress.