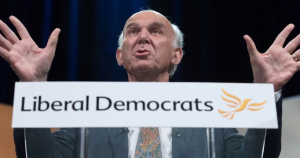 It is often suggested that attitude reflects leadership.  There is no better example of this than the current predicament facing the Liberal Democrat party at the moment as they kick of the 2018 conference season in Brighton.  Just one look at the press room or conference floor yesterday could tell you that they are lacking energy, direction and above all a credible leader that can galvanize them to be a force at the centre of UK politics.

The Liberal Democracts reached their zenith during the leadership debates in the 2010 general election.  Following the first televised debate in history, they went from being just another protest vote party, to credible contenders.  ‘Cleggmania’ entered the British lexicon, with fresh faced leader Nick offering a progressive vision for the future in the fact of the stale, status quo put forward by Cameron’s Conservatives and Brown’s Labour.  Sadly we all know what happened next.  Coaxed into a coalition on the promise of a voting system referendum, the Liberal Democrats became the whipping boys for unpopular ‘austerity’ policies that were desperately needed in the face of the financial crisis.  Their u-turn on tuition fees sounded the death knell for Clegg and from there there has been no going back.  They were wiped out at the 2015 General Election, only to come back and make only modest gains in 2017.  Leader Tim Farron had tried to position them as the anti-brexit party, but spent the whole campaign facing questions about his christian believes surrounding gay relationships.

Current leader Vince Cable took over as leader in 2017, promising to re-energize the party and ‘centrism’ as a political force, but he simply has not made an impact.   Cable is a respected political figure, but at the ripe age of 75, he is not the fresh face the party needs if it is to contend with Labour’s ‘Momentum’ movement or even the euro-skeptic movements within the Conservatives.  He has continued to attack Brexit and insult its supports, calling Brexit an ‘erotic spasm’ in his conference speech yesterday.  He has also talked about the need for a centrist version of ‘Momentum’, but there is no clear plan of action.  There was talk that Gina Miller, the Hedge Fund manager that won a victory in the Supreme Court vs the Government over the triggering of Article 50 last year, as a potential savior of the party.   Miller was given the prime slot on the conference bill yesterday, but in interviews afterwards, distanced herself from party, claiming she was not even a supporter, but merely a ‘friend’.

The Liberal Democracts are running out of time and options.  It is time for Cable to go and a new figure to step forward.  There is certainly an appetite for moderate, centrist parties at the moment.  One only has to look across the channel to the success of Emmanuel Macron’s ‘En Marche’ party to see what can happen when a charismatic leader with a clear, moderate vision, captures the attention of the public.