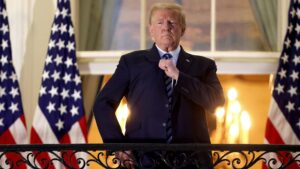 In 2015, Donald J. Trump, a billionaire business man known for his television appearances, chain hotels, and trashy casinos, announced he would be running in the 2016 presidential election under the slogan ‘Make America Great Again.’ He claimed the ‘American dream is dead’, but that he would bring it back, making America ‘Bigger, better, and stronger than ever before’.

To the world’s surprise, a man not afraid to use racial slurs, and with several sexual misconduct accusations under his belt to last a lifetime, won enough electoral votes to be sworn into office on January 20th 2017. Despite all his sexism, racism, xenophobia and homophobia the American people love him.

The truth is, Trump was not elected despite of all his ‘isms’ and phobias but for them. In a growing population of authoritarians in America, Trump was the voice they needed.

In a world where globalization progresses more everyday with the growing technology and social media we have, the ‘other’ has become an increasingly growing threat. One of these threats can be shown quite clearly on Branco Milanovic’s elephant chart. This chart shows how in the last few decades, the bottom 70% of the world’s wages  have almost doubled. This group is spread around in the East where developing countries are industrializing and catching up the West. A similar trend can be seen at the top 1% of the world, the millionaires and billionaires. And in the middle, the European and American middle class making up the top 30% of the world are left behind, with almost no increase in their wages. Economically, this causes panic, as the lower class are catching up, and the upper class are speeding ahead, this is only one factor which urges the Western middle class to identify and vilify a group of ‘others’. Add a sprinkling of ‘woke’ culture and the growing influence of social media to this and you create the perfect recipe to ‘activate’ someone’s authoritarian tendencies.

You then only need look at the news to read about terrorist groups based on religious extremism, nuclear threats in Russia and North Korea, as well as the wars and conflicts in the middle east, which are effective at making a non-authoritarian vote for an authoritarian leader. This would explain why 38% of Trump’s voters scored Low on the authoritarian scale.

These authoritarians all seem to be concentrated in the Republican party, where 55% of voters scored ‘very high’ or ‘high’ on the authoritarian scale. This can be explained by the final theory by `Hetherington and Weiler, which theorizes that the Republican party’s rebranding in the 1940s to a conservative party which believed in upkeeping the social status quo caused authoritarians to flood to the GOP. Therefore, the more authoritarians in the GOP, the more power they have in the party, as they count for a substantial amount of votes. This explains why Trump, who is largely disliked by the mainstream party was put at the top of the party.

All three of these theories make it quite clear why 55% of Trump’s supporters scored very high on the authoritarian scale, 42% high, and 33% medium.

The bottom line is, Trump is an Authoritarian’s dream. He is very skillful at identifying an ‘other’, vilifying it, and acting against it again and again. His insistence on being politically incorrect through his use of offensive language is only helping him, as it aids to draw a clear line between white middle class Americans, and the growing population of people of color and the LGBTQ community in America. What is most impressive is when Democrat runners have tried to address these fears and suggest solutions, they only stir up more fear and increase Trump’s support.

In a sea of ‘cofvefes’ and his famous catchphrase ‘You’re fired!’, Trump has said powerful claims, which is what authoritarians see in him. Although most of us can see the humor in the quote ‘I will build a great, great wall on our southern border, and make the Mexicans pay for it’, it is sentences like these which inspire authoritarians, and people to support Trump.

In essence, Trumpism is just the new, hip flavour of authoritarianism, and although Biden is soon to be President, it will only continue to grow in popularity, and may even undergo a few name changes as more ‘Trumps’ appear. But in the meanwhile, Trump is not going anywhere.