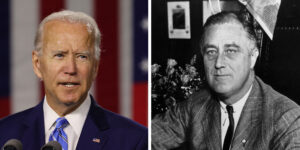 Many have argued that the 2020 election is the most divisive yet crucial election in US history, due to increased polarisation amongst Americans, the coronavirus and Trump vs Biden. All three have accumulated to political and social chaos, ranging from the war seen on the streets of Portland, to the war doctors have to fight on a daily basis across the USA, and ultimately to the war between Trump and Biden. However, the 1932 election provides us with a valuable comparison. As both elections transpired during the climax of historic economic and social disarray, both elections then favoured a candidate promoting change rather than arduous preservation of the status quo.

Both Hoover and Trump were incumbent presidents who faced tremendous challenges, yet subsequently failed to meet these challenges. Whilst the two incumbent presidents both not only downplayed the crisis they faced, but also provided little support to those worst affected by it. Under Trump the US saw the largest levels of unemployment since Hoover’s presidency. The failure of the Trump administration to tackle covid was astonishing, with the wealthiest country in the world seeing the highest amount of deaths.

This can all point to Trump’s stubborn incompetence to incorporate bipartisan support over the time of his presidency, and his persistent message of social deterioration through consistent polarisation. Even Hoover, who did allow for the great depression to unfold, ultimately accepted defeat and respected the conventions of a democracy. Despite his tactic of amalgamating with dictatorial rulers such as Erdogan, Putin and Kim Jong Un, Trump failed to form any secure alliances with any of them. This has highlighted his blatant diplomatic incompetence, which consequently tainted long lasting US relations with legitimate democratic unions such as the EU and UN. Conjuring rather alarming relationships with autocratic leaders, he destabilized the global balance of power. However, as it did in the late 1920s, Trump’s isolationist tactics left the world more prone to global shocks, such as the coronavirus that went on to conceive a devastating recession.

Before his election as President, Biden saw a much closer race than FDR saw, and the comparison remains highly relevant. Mark Twain once said “History doesn’t repeat itself, but it often rhymes.” FDR’s plan to ease the effects of the depression procreated by his predecessor, through the installation of ‘big government’ operations to stimulate growth through the construction of new infrastructure, was enacted. Similarly, Biden offers significant COVID-19 legislation which would also involve substantial government intervention, to undertake the task of defeating the coronavirus, whether that be through vaccination or lockdown.

FDR’s election brought a breath of fresh air into the political landscape. His message of transformation for a better future was clearly highlighted through his slogan: “Happy days are here again”, which although they didn’t materialize immediately, did eventually occur. Biden had a similar approach to the 2020 election where his slogan was: “Our best days lie ahead”. If Biden does indeed seek to revitalize the US economy and rejuvenate the damaged relations the US had obtained through Trump, we could witness a stronger and more united US than what we had become accustomed to seeing over the past 4 years.

Biden therefore, has an enormous role to play in not only creating a more cohesive US society, but more importantly reinstating the US as the global hegemon, to guarantee the features of a liberal democracy are reestablished through cooperation with democratic IGOs. Isolationism

failed in the 21st century as it did almost a hundred years ago, and Trumpism has left its mark in history as one of the most corrosive ideologies in US history. Fortunately Biden recognised Trump’s inadvertent failures, and has already begun to heal the deep seeded wounds Trump created. Trump’s biggest political failure that Biden will be able to surmount is the Coronavirus pandemic. Aristotle stated: “A common danger unites even the bitterest enemies.” Trump’s inability to unite the US in tackling the coronavirus cost him the election. Biden has already shown signs of not making that same mistake, and thus taking advantage of the opportunity to unite the US. Biden after winning the 2020 election stated “We are not enemies, we are Americans.” In comparison to Trump, who in 2017 referred to Hillary Clinton soon after his election victory as ‘the biggest loser of all time’, and thus alienating half of the country, hence displaying his expertise in trenchant polarization.

Biden, like FDR once did, will have to undertake critical surgery on the USA’s damaged anatomy, to resuscitate the fallen nation, which fell victim to careless and calamitous leadership. The task to unite a highly polarized nation and to reinstate the USA as the global hegemon will not be a simple task, but with the election of Biden the future could not look more promising for the USA.