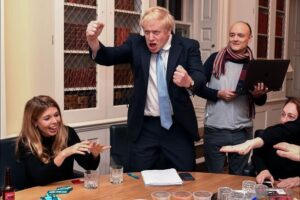 “A basic problem for people in politics is that approximately none have the hard skills necessary to distinguish great people from charlatans.” This Dominic Cummings quote encapsulates exactly what he attempted to do whilst he served as an advisor to Johnson: cut out the noise and focus on what was necessary. Cummings’ direct strategy seems to have finally caught up with him, as Johnson evidently believes that he can no longer work effectively alongside his spin doctor. In the recently released series 4 of ‘The Crown’, Diana and Charles leave a young Prince William on the steps of the steps of our very own Cranleigh school, painting a convenient parallel of Johnson and his partner Carrie Symonds (albeit less lovingly) leaving Cummings out in the cold to fend for himself. But this move is only a small part of Johnson’s master plan, which could enhance his image as the Prince that has come to save the day.

I wrote a blog just two weeks ago suggesting that the state of global democracy has drastically deteriorated in the wake of the Covid-19 pandemic, and although official data implies that the pandemic has not affected the quality of British democracy, Tory plans for the future paint a very different picture. The plans, as set out in the 2019 Conservative manifesto, involve the weakening of judicial, political and administrative limits that have constrained Tory government so much in the last decade. Particularly the weakening of the judiciary would serve to free the incumbent administration massively, as they are all too aware of the possibility of another future defeat as damaging as either the 2017 ruling on Brexit or the 2019 Prorogation verdict. Danny Kruger, a Conservative MP, has said it is simply “a restoration of politics to its proper place at the apex of our common life”, and although this is certainly the way some see it, others will merely be able to shake their heads in disagreement and watch the drama unfold.

Whilst this plan is all part of Cummings’ grand vision, his dismissal from Whitehall signals Johnson’s willingness to eliminate those that get in the way of his objectives, with Symonds also convinced that the Chief of Staff has done this on a number of occasions. This ability to brush off any political opponents was seen by Johnson’s blunt dismissal of Andy Burnham’s pleas that Manchester should avoid going into a tier 3 lockdown, whilst Sadiq Khan also accused the PM of a power grab after it threatened to gain control over Transport for London whilst undergoing bail-out negotiations. Johnson is resurrecting the ‘elective dictatorships’ of the past, seeking the presidentiality of the likes of Thatcher and Blair, all the while sweeping the nation along on a wave of populism. Johnson’s disregard for restrictive institutions extending into the international sphere is ultimately illustrative of the Britain he is trying to shape, as his disregard for international law whilst passing the Internal Market Bill suggests domestic restraints would be even less of a concern.

“The first method for estimating the intelligence of a ruler is to look at the men he has around him.” Machiavelli’s words still ring true today, and it is clearer than ever that without the right advisor by his side, Johnson holds destructive capabilities that should not be underestimated. His puppet days are seemingly over, the power grabs will continue to happen and Britain will ever increasingly resemble an authoritarian Machiavellist state. Without the hard-line Brexiteers Cain and Cummings alongside him, the path the current administration will take will certainly be different. Unless an aide who is able to manage the PM is appointed, this course may be unpredictable and dangerous. Can the prince be tamed, or is it finally time for Johnson to pull the strings?