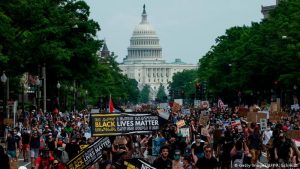 “Rebellion is etched into American, and human, history. When people are systematically beaten, killed and not given the resources to thrive, rebellion becomes inevitable,” writes Phillip V Mcharris in the Guardian. Scene six of the horror movie of 2020 is just beginning, surfacing a problem more severe than a global pandemic, having claimed more lives than covid-19 will ever take, and affecting people’s lives more profoundly than a lack of pubs and pints. The protests over racism, epitomised in the murder of George Perry Floyd, may signal great socio-economic change to come, but the response by the American government suggests storm clouds ahead for the land of the free, and everything it stands for.

Trump’s response to the events that have unfolded thus far this year had already been questioned by many of his ‘supporters’, and that was before the recent race demonstrations began to take shape. At the helm of a country that prides itself on individual freedom and a right to liberty, the ‘law and order’ president is dismissing (not unreasonable) calls for his response to this crisis to be equally as liberal, however it seems he is more determined than ever to hold his ground, albeit if it leads to the demise of America’s beloved liberal democracy.

The president’s statement that he would send in the military on the 2nd June signaled a distinct orientation of government policy regarding the nationwide protests, however it is one more synonymous with some of the repressive dictators America’s neighbours further south have had to deal with. He is playing with key rights expressed in the American constitution, such as the right to assembly, and yet Trump seems to have little issue with disregarding what the people hold dear to them. Yes, it may be true that something has to be done to prevent protesters from being killed or property vandalised, but it is also necessary to pick apart the structural racism that plagues the US, something Trump is significantly less vocal about.

The single most fundamental pillar of democracy, without which even the constitution cannot be supported, is that of John Locke’s social contract, and yet even this keystone holding the USA together appears to be under threat. Has Trump broken the social contract? The answer would differ massively based on opinion, however it is evident that the government is failing to fulfill its purpose of protecting its black citizens. Locke argues that if the social contract is broken, the people have a right to withdraw their consent and seek alternative government. In relation to the US declaration of independence, it is clear that the people have the right to overthrow their government if their unalienable rights have been threatened and although such a case may look extreme at present, Trump is aware he will have to tread on eggshells in the near future to avoid the possibility of such a reaction.

Future scenarios also have potential to exacerbate the situation further, and the here and now should not be the only worry of those seeking to protect liberal democracy in the US. Presidential elections are looming in November, and whatever the result, Trump looks unlikely to go down without a fight. One is reminded of the baby balloon blimp of the President flown in London in July 2018, and it is feared he could throw his toys out the pram in a similarly childish manner. There is the possibility that he will refuse to accept the result altogether, and although the new incumbent president would have no trouble in physically removing him from the white house, it would not be beyond Trump to claim the election had been rigged by, say, maybe the Chinese. Another scenario is that Trump could stir up his Republican army, bringing a wave of terrorism over the country that would serve to disrupt the freedom of the nation, whilst also severely undermining the legitimacy of Biden’s new government. Either plot would be deeply damaging to democracy as a whole in America.

Whichever way events do play out in the coming months leading up to November could have little effect. The damage has already been done, and there will be little Trump can do to avoid what many are predicting to be an inevitable outcome. It can hardly be said that the president will be gracious regardless of the result, as grace was certainly not shown to the protesters he cleared with tear gas and rubber bullets to walk across the road to the house of God. Trump’s time in office may be drawing to a close, and so to with it the liberal democracy of the land of the free.