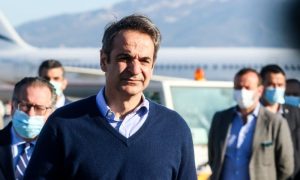 Greece, a nation of 10.7 million people has witnessed economic downturns, social upheaval, and a debt amounting to 376 billion US dollars, which in 2018 ranked them second in debt to GDP per country. These economical and political consequences, matched by the fact that Greece has the second oldest population in Europe, could have been the last words in Greece’s obituary, as the coronavirus pandemic approached this ancient republic.

However, due to the immediate response of the newly elected Prime Minister Kiriakos Mitsotakis, and his centre right party, Greece was able to confine the spread of Covid-19 through strict social distancing measures which had begun towards the end of February. This could be seen when, on the 27th of February, a day after the country’s first Covid-19 case was diagnosed in Thessaloniki, Greece’s second largest city cancelled its annual carnival. Two days later Greece shut numerous public places like cafes, restaurants, libraries and museums, and ultimately by the 22nd of March went into full lockdown. These early responses, ordered by the newly elected government, allowed Greece to have a slightly earlier full scale lockdown in comparison to other European countries which instead chose to wait it out and then abruptly go into a full scale national lockdown.

This could be one of the possible reasons as to why Greece has managed to have some of the lowest cases of Covid-19 for its population size. In between March 6th and April 5th European countries similar to the population size of Greece such as Belgium saw 19,691 new cases, The Netherlands saw 17,851, Portugal (a nation with fewer people than Greece) saw 11,278, whilst Greece managed to accumulate only 1,735 cases. These exceptionally low numbers coupled with a low death rate, have brought about a revival in Greek spirit, which had been largely annihilated after ten tumultuous years of economic recession and nation wide depression.

These raw statistics nonetheless can be deceiving, as many have associated these very low infections with lack of testing; this criticism would be fully justified. As Greece has only tested around 70,000 people at the time of this writing, this number in retrospect is less than one percent of Greece’s entire population. This has been largely the case due to lack of public funding available to test more people, as even though Greece is no longer in a recession, it still has to comply with basic austerity measures. Therefore the number of infections is not the most reliable way of measuring how Greece is coping with the pandemic. This leaves us with the death rate of a Covid-19 in Greece, and well it has been remarkably low with only 180 deaths which is ranked 126 in the world. In comparison Czech Republic, a nation nearly identical to Greece’s population has twice as many deaths, and Portugal, a country with 500,000 fewer people has 15 times more deaths than Greece. This proves that even though Greece has had frighteningly low test rates, the nation has still managed to handle Covid 19 as seen with such low deaths.

However, the reason why Greece has managed to keep such a low death rate is not due to enormous government paid for public health services, but rather due to its efficiency. As Greece’s leading health official Mr Tsiodoras realized that the only way to keep a Covid 19 patients alive is by bringing people in who have any symptoms, unlike other nations which instead only permitted patients with life threatening symptoms to attend hospital.

Nevertheless, some would say that this is simply due to the fact that Greece ranks 4th in the world with physicians per country, however I would disagree. Spain, a nation with only 5 less doctors per 10,000 than Greece, saw the worst of the outbreak with 27,000 more deaths than Greece. This shows that high amounts of physicians per person is not a valid reason for low levels of Covid 19 in Greece, and thus circles back to the fact that Greece not only adopted an early lockdown, but it’s people embraced the lockdown too. Mr Tsiodoras mentioned in his final press briefing that due to Greece having the second oldest population in Europe, if lockdown was delayed ever so slightly it would have led to the deaths of a minimum of 13,000 people, in comparison to the 180 which had occurred.