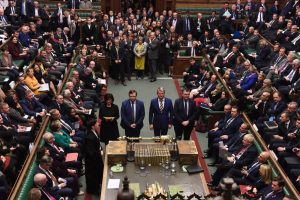 “It is as if someone has drawn a thick red line round the parliamentary estate and labelled it in big, self-important letters.” Upon uttering these words last year, Tony Blair conceptualised a pressing problem with uncanny precision. MPs are bathed in a golden light and expected to act accordingly. They don’t. Trapped between a rock and a hard place, politicians are stuck in limbo between their self glorification and a less idyllic reality.

Submerged in the elitist world of ‘the Westminster bubble’, politicians receive exalted status, partly a result of the history and grandeur of parliament, but also down to MPs’ own sense of self regard. Continually having to self-promote in order to secure office, expectation levels are naturally going to be high, and soon become an issue when they can’t be met.

Across the world, the reputations of politicians are in free fall, the UK being no exception. A barrage of online information provides the public with unprecedented insight into MPs’ lives, exposing with greater clarity their highs, but also their lows.

However, this newfound intimacy is not necessarily something to be celebrated. Many previously high-flying MPs have, following uncharacteristic slip-ups, been rendered obsolete or at best mediocre. It is during these controversial Grant Shapps-style moments when the public’s outbreaks of hysteria (at bingo tax adverts, amongst other gaffes) go too far and fail to be realistic.

Of course, the nature of the job demands tenacity and a desire to incite change, yet the frenzied flurry of pre-election campaigns causes MPs to bite off a bigger agenda than they can chew. In service of an insatiable electorate, politicians are under pressure to prove themselves in any way possible, simply to remain in office. The public must wake up to the fact that they themselves are impossible to please, and begin to grasp where their demands have gone too far.

Every MP has their limits, but the public seems to have limitless expectations, stretching MPs as far as they see fit. As an individual, what can an MP really do apart from use their Commons letterhead to try (often unsuccessfully) to aid a cause that was never going to be won anyway? A realistic viewpoint from the public is needed more than ever, as politicians already do their best to exercise the limited power they have.

The disconnect of politicians from those they should be representing is becoming ever clearer. “In fact, more MPs come from finance alone than from social work, the military, engineering and farming put together,” writes Aditya Chakrabortty of the Guardian newspaper. With so many MPs coming from gilt-edged professions, it is little wonder the public struggles to sympathise and instead expects them to seamlessly master every aspect of political life. Juggling the roles of PR guru, social worker and public punch-bag simultaneously is not always achievable, even for the best of bankers.

Perhaps it’s a catch-22: the only solution seems to be that the public temper their demands, yet paradoxically their expectations are raised at every election as MPs attempt to win back their seats. Breaking this seemingly unending cycle requires effort on both sides. The public certainly expect too much, yet their representatives constantly add fuel to this eternal flame.

The public expects an Incredible Hulk, capable of aggressively flexing their political muscle, but perhaps they should be more content with a Bruce Banner. The people of the Commons are as common as the name suggests, and they already do so much to make our country a better place.