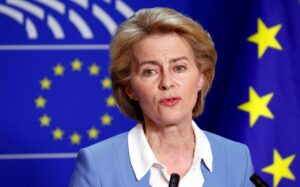 Brexit has arguably strengthened the integrationist agenda within the EU. This agenda has fallen away somewhat since its surge after the end of the Cold War, which saw rapid enlargement and the birth of the single currency. Now a new generation of politicians has replaced the likes of Juncker and Tusk in Brussels, and they may resuscitate the mission of ever closer union.

By the end of this decade, the EU will be well on the way to tax harmonisation, fiscal integration, and a far more centralised foreign policy which may include unified military command and policing agencies. Britain, always the one great power within the bloc that vetoed further pooling of sovereignty in these areas, is now out of the way. The Berlin-Paris axis could now re-assert itself in leading a major consolidation of the EU, steering a path from the confederal arrangements of today towards the proto-super-state of 2030. This certainly is what President Macron of France has advocated.

And where Berlin, Paris and their allies will be the pull factor, there will be three big push factors in operation.

The first and most obvious of these is that, if the single currency is to survive and function properly, there will need to be greater institutionalised oversight of the fiscal policy of all member states. The budgetary incontinence of Greece nearly brought the whole system down last decade. That crisis was papered over by inter-governmental action, supported by the IMF and by expansive monetary action at the European Central Bank. If a similar crisis erupts again, the response may yet be a far more robust budgetary intrusion into member states by the European Commission. This could include dictating precise levels of government borrowing and taxation. A single currency cannot really exist in a stable condition without a unitary fiscal framework. The creation of the Euro placed monetary authority in Frankfurt. Another crisis may yet place firm fiscal authority in Brussels.

The second factor is the dormant but ongoing threat of mass immigration from the middle East and Africa. There is no way that European member states can absorb immigration waves like that of 2015 long-term. There simply has to be a far more coordinated policy at the centre to deal with this, or states like Hungary and Austria, feeling themselves overwhelmed and dictated to, may even quit the union. There needs to be an EU border force, and probably an internal EU police force similar to the FBI in America. Organised crime, drug and people trafficking require similar responses and may lead to the same developments.

Finally, with question marks over the solidity of the NATO Atlantic alliance, and with Russia attempting to divide its opponents in Europe, the EU may yet seek to develop a far more coordinated and centralised foreign policy than it has as yet, and one which includes hard as well as soft power. This may have to include a European military command, something that the British always blocked because they saw it as a French attempt to undermine the Atlantic alliance. But the British do not have a say any more. It can even be argued that NATO is failing to deal with some of the “asymmetric” threats posed by Russia and other states and non-state actors – cyber warfare, political de-stabilisation and the like. The European Union at its core is built around the values of western liberal democracy. If those are under threat then they must be defended. It is high time that the EU had the capability to defend what it stands for without necessarily looking across the Atlantic. It is likely to remain in firm alliance with the Americans, but without relying on an American security umbrella.

It is doubtful that these trends towards EU integration will follow some grand plan. It is more likely that they will develop piecemeal, through pragmatic and often urgent responses to challenges as and when they arise. Yet by developing in this organic way, they will probably prove more durable and robust than if they were produced to any contrived blueprint, like the failed 2005 EU draft constitution. And if the EU does integrate in a more stable direction, then that should be a good thing for the world, and a good thing for its closest and most important neighbour and partner, Great Britain.