Skip to content
Cranleigh School Blogs / Politics Department Blog / van Hasselt Award / Should the government tax and regulate e-cigarettes in the same way as normal cigarettes or ban them? 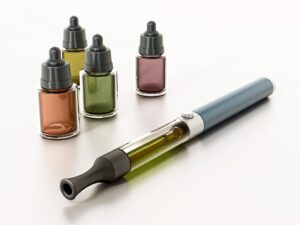 Recently in the news there has been a sudden proliferation of deaths relating to the usage of the well known and frequently used e-cigarettes. All of a sudden people are beginning to see the effects of these e-cigarettes and this has been extensively reported through the press. Nonetheless, should they really be banned or taxed?

The predominant aim when the E-cigarette were created was “to provide a similar sensation to inhaling tobacco smoke just without the smoke”, they were also created to provide an alternative to smoking which had become known to cause serious illnesses, such as Emphysema, which is a lung condition that causes shortness of breath. The disease happens due to the smoke damaging the alveoli and therefore reducing the surface area meaning less respiration can happen, which is a necessity for humans to survive. Subsequently it is the third leading cause of death in the United States. There is also no cure for it, but only medication that can be provided to slow down the process of the disease. This however, is only one of many diseases that causes death from smoking. Having said that, it is why people revert to using E-cigarettes, which is considered to be a healthier option for the human respiratory system.

Although vaping at this current point in time is considered to be safer for humans, there are still multiple signs of it being very harmful to us. In July 2016, a study published in Environmental Science & Technology discovered that the emissions in the vapour include possible carcinogens and irritants although it being at a much lower level than in conventional cigarettes. Another statistic found states that it is, I quote, “95 % less harmful than smoking”. This therefore leads me onto the question. ‘Should government tax and regulate e-cigarettes the same as normal cigarettes or ban them?’.

First of, to ban them at this point in time I feel would be too extreme of a measure for the government to take to reduce the amount of people using e-cigarettes. This is because to some people it truly is a vital necessity in their lives which they crave throughout the day. I believe an approach similar to smoking should be taken. To impose a tax on vaping

won’t completely wipe out the usage of them, it will only slightly reduce the number of people using them, similar to what happened when the tax was imposed on cigarettes was used. Another possible approach that has the potential to be used could be where the government puts in place a rule that states that you can only purchase e-cigarettes from medical facilities were a doctor has given consent for the person to do use them. The doctor here should aim to only give the vapes out when he or she knows for certain the patient is addicted and/or requires an e-cigarette in their attempt to quit smoking.

Putting this rule in place will in fact mean the e-cigarettes are used for the reason they were created in the first place, which is for people who are trying to quit smoking. Doing this will also reduce the usage of e-cigarettes amongst teenagers, which currently at a very high level. The effects however that vaping has in the younger generations are much more severe, slow brain development decreasing memory, concentration, learning, self-control, attention, and mood are only a few of the many effects vaping has on teenagers.

Therefore, cutting down on the usage of teens using vapes would probably be the most significant consequence of the banning of the vapes, as this is the area in which vapes are commonly misused and mistreated. If vapes were banned and only given out when necessary, which I believe is the best system to abide by, deaths from vapes will be massively reduced and the health of those who are using them only for recreational use will improve greatly. So in conclusion, this is why I agree that the government should ban e-cigarettes.