Skip to content
Cranleigh School Blogs / Politics Department Blog / van Hasselt Award / When is it right to engage in acts of civil disobedience? 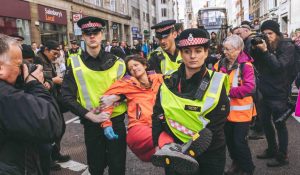 “One has a moral responsibility to disobey unjust laws” – Martin Luther King Jr.

Martin Luther King Jr. was one of the founders of arguably the greatest and most influential civil disobedience movement. King and his supporters directly broke laws and disobeyed orders in order to force the powers that be to listen. This being said, many people thought very pejoratively of the Extinction Rebellion protests last month. The protesters brought traffic to a standstill and prevented many people from getting into buildings to work. These were similar techniques used by the civil rights movement in the 1960s. However, Martin Luther King’s civil rights movement or Emmeline Pankhurst’s suffrage movement are widely regarded as vital. So why is civil obedience in some cases appropriate, and in others it is an unnecessary disruption?

One possible view, although fundamentally flawed, is that in order for civil disobedience to be ‘allowed’ two criteria must be met. Firstly, the disruption must be a last resort. It is probably safe to say that if the goal of the protesters can be reached in a calm way in which no one’s day is disrupted and no acts of civil disobedience are committed, this is preferable. Though, in reality, this is not always possible, sometimes people will only listen when they have to, so they can go about their day normally. The second criteria is whether or not the movement behind the disobedience is a worthwhile cause. However, this is where I believe this argument breaks down. This is because it is impossible to determine who has the right to decide what is a worthwhile cause. Answering ‘the majority’ to this question does not work as often the greatest of causes are fought for by the minority. So, it is clear that it is more or less impossible to determine how worthwhile a cause is and whether it is worthwhile enough to warrant an act of civil disobedience. It is only in hindsight it becomes clearer the importance of a cause. Therefore, any movement which people feel strongly enough about and are failing to get anywhere through less disruptive means, has no option but to commit civil disobedience. As Martin Luther King said it may even be their moral obligation.

Furthermore, not only is it difficult for society to decide appropriate causes, but it is arguably also wrong for us to prevent acts of civil disobedience even when they seem ludicrous. The fundamental rights behind acts of civil disobedience are arguably the most important rights we are entitled to as humans. The United Nations Declaration on Human Rights grants every man, woman and child the right to freedom of speech, the right to freedom of association and the right to freedom of assembly. These fundamental rights not only underpin our democracy and our core values, but they also allow for the concept of protests and civil disobedience to be a right we all possess. To say that civil disobedience should not be done would be the equivalent to silencing people, which cannot be tolerated. The minority must be allowed to protest when they disagree with the status quo. A failure to do this would make our society no better, on principle, than Mao’s China, Stalin’s Russia or Hitler’s Germany. It is therefore clear that some sort of civil disobedience must be right. We have to let people speak their minds in the street, the consequences of failing to do so would be disastrous.

To conclude, if it is not possible to draw attention to a certain cause through more conventional methods, civil disobedience is arguably always right. People must be granted the right to take to the streets and fight for what they believe in. If no one is physically harmed and limited damage is done, we must allow civil disobedience to not only exist but thrive in our society. It gives the oppressed and the concerned a voice when others won’t listen. To ban it and arrest people would be the same as silencing people, which is against everything our society believes in. Therefore the opinion of many that a cause must be worthwhile to warrant an act of civil disobedience is ludicrous, as what gives someone the right to silence another individual. So, the fact protesters at the Extinction Rebellion protests were arrested potentially undermines the values that our society holds at its core and should never have happened.