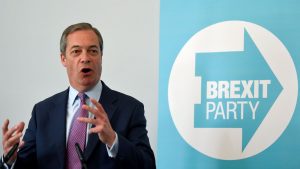 I shall be voting for Nigel Farage’s Brexit party on 23rd May. It will feel naughtily enjoyable. No-one can ever know, but do it I shall. And I will do it in spite of disagreeing with Nigel Farage over the majority of what he believes.

Firstly, he thinks that Europe would be better without the European Union, that a continent of fully independent and fully sovereign nation-states would be free and stable. He needs a history lesson very badly. Imperfect though the EU may be, it is still one heck of a lot better than Farage’s vision, not least from a British point of view. I voted in 2016 to remain in it because I reasoned that, if Brexit were to weaken the EU terminally, we would be undermining the continental stability and balance that British foreign policy has for centuries been aimed at creating or sustaining. Nationalism has always been a disaster for Europe, and I was uncomfortable with Farage’s version of it encouraging its development on the continent. If we left by referendum, I figured darkly, we might end up once again returning by landing-craft.

Farage also bangs the drum of contempt for our main representative institutions – Parliament, political parties, cabinet government – by going on about “the political class” and the “Westminster bubble” and the “out of touch elites” and so on. In my view, the tone of Farage’s populism damages the health of British democracy when he calls out the deliberations of elected representatives as some sort of conspiracy of the powerful.

So why am I going to vote for him, this once? Because he is right about the central question at hand: The UK must leave the European Union properly, because if you hold a referendum you must abide by its instruction. That unequivocally means what has been dubbed a “hard Brexit” – no Customs Union and no Single Market. That this must be delivered is a point of principle, but it is also crucial to the long-term stability of British politics.

The rear guard of Remainers – Anna Soubry and friends – cannot seem to see that if they got their second referendum, and they won it, the argument would never go away. You would have your British Gilet Jaunes up and running in a flash; Farage, and the heirs to Farage, would forever be there, crying betrayal. In this scenario, the split over the Brexit issue – for now probably a more or less temporary one which overlays the customary left-right two party system – would become baked into British politics permanently as a new axis of public debate and partisan loyalty. Political paralysis would set in, with neither side coming off their positions, like some endless and terrible family feud from which there are only losers. Sooner or later Farage would get a third referendum. On and on would the death spiral go, shriller and shriller would it sound, a whole generation defining itself around bitter identity politics – are you Leave or Remain? – long after the original rational arguments for either standpoint have been forgotten. Neverendums would become entrenched in the British constitution, parliament would be increasingly undermined, and civil disobedience and divisive post-truth politics would infect the mainstream of British political culture. Hard Remainers may have their membership of the EU back, but at the price of British democracy.

The other Remain option is softer, of course. It involves being within the European Union in all but name, really: something like May’s deal or a softer version of it. This can be defended by pointing to the ambiguity of the 52% to 48% vote, to the idea that hard Brexit would break the Good Friday Agreement apart by re-imposing a hard intra-Irish border that would inflame republicans, and to the likelihood of economic damage if we were to “crash out”.

Well, the vote was close, but there was no super-majority requirement or quorum measure for that 2016 referendum. So the decision was the decision, and throughout the campaign both sides of the argument were clear that the decision would mean leaving the EU fully. A half-in, half-out arrangement such as May’s deal or anything that could yet be negotiated between her and Labour would be a fudge that would leave us with many of the worst features of the EU and none of the potential best features of a cleaner Brexit – less regulation and so forth. I little doubt that we will remain in close cooperation with and in practice largely in alignment with the EU whatever happens; but in the “hard Brexit” scenario we would not be legally bound to accept and enforce laws made by majority vote in the EU’s council of ministers which directly conflict with our own perceived national interest. In most of the “soft Brexit” scenarios being debated, we probably would be effectively bound to EU rules, without necessarily having a say in them. And that, like remaining via referendum, would mean that the argument would just rumble on and on.

As for Ireland, nobody has said they will build a hard border. It would be a muddle and probably a smugglers paradise, but with no hard border there should be no return to violence. The DUP could probably yet be won around by the arguments in favour of preserving an integrated Irish economy if given a copper-bottomed, cross-bench guarantee that the union would remain in place even with a customs border in the Irish Sea. The Irish border is probably the most intractable issue of them all, but it has been heavily exaggerated and leveraged by Remainers here and in Europe in order to torpedo Brexit. As for the UK economy, there may be structural change in many sectors which will cause pain, and there may be some initial shock which triggers a cyclical downturn. Equally we could see a short-term bounce from deferred investment. Businesses are better prepared now and the economy seems oddly buoyant. Brexit need not be cliff-edge stuff. Once we leave, adjustments can be gradual – a sort of UK-wide backstop. Above all businesses want more certainty, and so they need a decision.

And so above all does British politics. I will be interested to see what happens on 23rd May. All bets are off, but for now Farage’s party is polling well. The vote could end up presenting an instruction that Brexit must be somewhat harder than our current political leadership – still reading what they want into the 2016 result – is currently willing to consider. Even if there is economic damage through leaving with a hard Brexit, this would be far outweighed by the political damage that remaining within the EU would cause. We have to get out, and we have to move on. If the Brexit party can provide some sort of mandate for that in the upcoming elections, and this then brings moderate Remainers off their current positions and towards a conclusion to all this, then it will have served its purpose.

And if that means we never have another referendum about anything else, ever again, then so much the better!