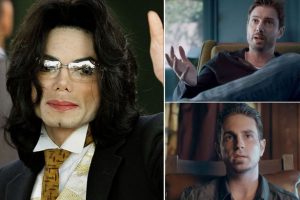 Whether it is right or wrong, it is an undeniable fact that Michael Jackson is one of the most famous musicians of the last century, if not ever. With over 21 million monthly listeners on Spotify alone, he is a man who has changed the face of music and 70s /80s American culture. There have always been rumours about the illegal activities Jackson was involved in, sometimes involving minors. However it wasn’t until recently that two of his supposed victims have come forward to tell ‘their story’ about Michael Jackson and what he did to him.

In my opinion the question ‘is it morally wrong to listen to the music of Michael Jackson?’ conjures up two separate questions. Firstly, is it right that people such as Michael Jackson are tried by the media and ‘found guilty’ on the basis of the word of a few individuals when the accused has no way of responding to these allegations? Secondly, can we separate the man and his behaviour from the music he produced.

In the particular case of Michael Jackson, I think the answer to the first question is yes. Although not certain, it is probable that the allegations have some truth behind them; the sheer number of allegations, the previous scandals and the ‘payoffs’ certainly make this seem very likely.

Therefore, for the remainder of this article I will assume the allegations to be true and focus on, in my opinion, the more interesting and relevant latter question. This question is a vital question for the progression of our society and unfortunately quite a common one. With the rise of #MeToo, the concept of whether we can or cannot separate a work of art from its maker is coming under more scrutiny. The answer to the Michael Jackson question surely sets the principle for any film in which Kevin Spacey acts in or indeed any piece of literature written by Oscar Wilde. If we were to go down this route then we would be ruling out hundreds of films, songs, literature and art. This would result in the loss of some truly incredible pieces of work. The 21.8 million Michael Jackson fans on Spotify may be rather put out if we suddenly tell them they are no longer allowed to listen to Man in the Mirror.

For me, the answer to this question stems from two main points. One a point of practicality and one of principle. If we allow artists like Michael Jackson to go ‘unpunished’ and we continue to listen and love his music then does this not then tell other famous artists thinking of committing these serious crimes that they can do it? “People won’t care as long as they love my music, films, etc.”. To me this seems ludicrous. If we were to condemn these people by refusing to listen to their music or refusing to watch their films this would be much more powerful. In a similar sort of way the environmentalists are rejecting plastic straws with their McDonalds and LGBT activists are boycotting Dorchester Hotels over the Sultan of Brunei’s policies on homosexuality. This is a widely done thing, boycotting a product to try and get across to the powers that be that we as a society will not stand for what they are doing. In my opinion this seems significantly more moral and potentially effective than the alternative. If not listening to Thriller again sent out a message to the world and stopped more young boys or girls being abused would you not stop?

Secondly, I think the idea that it is possible to separate some of these artists from their work is a naive one. The art and the artist in many examples, including the Jackson case, go hand in hand, with each complementing the other and neither being as effective without the other. People’s love for Jackson’s music arises due to the very fact that he was the one singing it. The dancing, the scandals, and the various body alterations he underwent created this package. His actual music was only one of the parts of his act. Therefore, when we listen to his music, we are buying into this whole package. We are buying into a man who it is clear is strange enough to not only bleach his skin but also capable of building a house for the sole purpose of abusing children. This logic extends to other artists as well. Oscar Wilde supposedly slept with a 13 year old boy (again, this is an accusation which I am assuming to be true for the purpose of an example) which I think shows that he was mentally unwell, yet we feel it is appropriate to listen or read the work directly conjured up in that brain. The same is true for actors such as Kevin Spacey. Arguably he is chosen to play a sinister villain such as Frank Underwood in House of Cards or the paedophile Lester Burnham in American Beauty because he had the demeanour of these things. When we appreciate a talent of a person, whether it be singing, acting or writing it is impossible to disconnect from the person behind the singer, actor or writer because in fact they make up a lot of what the work stands for and how it is perceived. I very much doubt Billie Jean would have been as successful if Michael Jackson wasn’t the one who sang it.

A counter argument to my points would be that to be an artist of such talent, you have to see the world in a different light to the rest of us and you have to be a bit mentally different. However, in my opinion this argument is just a desperate attempt to justify your love of an abhorrent person. Being an artist, so having to have a different mindset, cannot be used as an excuse to sexually, physically or mentally abuse anyone, especially children.

In practice, punishing Jackson for what he did may result in less abuse by people in positions of power and influence. In my opinion, it is impossible in most cases of art and artist to separate the two, with it being even harder in a case like Jackson’s. In principle, therefore, it is also wrong to listen to his music. It may be hard to stop engaging with someone we have loved for our whole lives, and yes, some truly incredible music, literature or film may be lost.