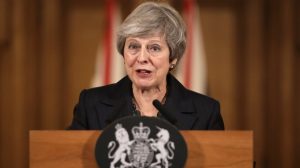 On the 20th of February 2016 David Cameron announced that a referendum would be held on the 23rd of June later that year,posing the question “referendum on the United Kingdom’s membership of the European Union: Remain a member of the European Union, or leave the European Union”. After the vote the results showed a 52% leave and 48% remain conclusion meaning that UK government must had to then follow through and answer the people by exiting the EU.

Over two years on and after a general election, it seems that Theresa May has finally struck a deal, which now needs the approval of UK parliament. The terms of the UK’s exit and future relationship with the EU has been settled across to departments; the long Withdrawal Agreement and shorter Political Declaration and were the result of eighteen months of tough negotiations. This deal has been approved by leaders of the other 27 EU countries, with Brussels claiming “it’s the only route towards an orderly Brexit”. However, within United Kingdom many leave voters argue that the UK would still be too attached to the EU and remain voters say that it’s far worse than current membership terms. Firstly the UK must go through an implementation period whereby the UK will still have to conform to EU laws for 2 years whilst having no say in the direction of the organisation. This is a huge disadvantage as many people argue that with this we are ‘surrendering’ to the EU. On top of this the UK will also be paying the EU ‘financial settlements’ of a total amount of an estimated 40 billion. This is also off putting as it involves large sums of money being paid to Brussels without improving relations or having any sort of say in policy/legislation during the transition period.

The answer to this could be a second referendum, which many argue would be acceptable as enough has changed since the former and people are now better informed regarding the two outcomes (leave or remain). This would pose the question as to whether citizens of the UK want to accept Mrs. May’s deal, leave without a deal or rejoin the EU which recently has been found to be a viable option; “The European Court of Justice has ruled the UK can cancel Brexit without the permission of the other 27 EU members.”This give the UK the option to retreat and return to life as it was before without any of the bitter consequences of the transition period or worse still,a no deal Brexit.

On the other hand, there are many backers of the deal and after having had a conclusive referendum the government must carryout the result or otherwise risk crushing democracy, legitimacy and causing a constitutional crisis whilst denying the leavers their vote. Many also argue that this transition period is actually beneficial, preventing a ‘cliff edge Brexit’ and giving people and businesses valuable time to adapt to the UK outside of the EU meanwhile allowing more time to reach a final deal. As well as this the financial settlement deal was arguably set out clearly from the offset and to back out from these now could reflect unfavorably on the UK’s reputation internationally.

Overall, it has now become clear that the UK has three options going forward, to accept the deal and leave without a transition period, to exit without a deal or to trigger a second referendum with the possibility of returning to the EU. The next few weeks will be incredibly eventful with parliament’s vote occurring on the 11th of December(tomorrow).