Skip to content
Cranleigh School Blogs / Politics Department Blog / Global Politics / What does the result of this week’s election in Sweden mean for EU integration? 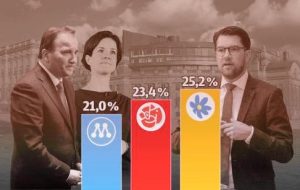 The success of the Sweden Democrats in that country’s general election this week may very well mean that a far right party, with neo-Nazi roots, could gain considerable influence over the government of a nation that is almost synonymous with Social Democracy, and which has a strong Scandinavian liberal tradition.

Though it is unlikely to become part of a coalition government (both mainstream centrist blocs have ruled this out) the Sweden Democrats could directly influence government policy through something similar to a confidence and supply arrangement with the centre-right alliance (which consists of a number of parties such as the Christian Democrats and the Liberal Party). For now, Sweden is in political limbo and coalition talks may remain deadlocked after a knife edge result produced by a typically continental proportional voting system.

Notwithstanding any direct arrangement the Sweden Democrats may negotiate, they have already influenced government policy in recent years, as the governing coalition sought to head off their populist anti-immigrant stance with a stricter immigration policy after and influx 600,000 new arrivals from Africa and the Middle-East, itself part of the wider migration crisis sweeping the EU. This has been a major shock to a nation of some ten million, which previously had been quite homogenous compared to the likes of France and the UK.

The rise of the Sweden Democrats is only the latest manifestation of popular disquiet resulting from the migration crisis which peaked in 2015, but which has not gone away. Austria, Hungary, France, the Netherlands, Belgium and Germany have all seen the rise of far right parties. Yet how far right actually are they? Many claim that the strategy of, say, France’s Front Nationale to appear more mainstream and respectable – to shed the image of racist thuggery – is merely a front, and that these parties are wolves in sheep’s clothing. Citing the lessons of the 1930s, perhaps wisely, many on the left and in the centre argue that there must be no cooperation at all with these parties, lest coalition deals become the Trojan Horse for a far uglier form of populist street politics and xenophobia. Some very unpleasant neo-Nazi rallies recently in Hungary and eastern Germany underline this argument.

Yet eastern Germany and Hungary have a far less established liberal tradition than western Europe or Scandinavia. And here we see parties such as the AfD (Alternative for Germany) which, though robustly anti-immigration, are otherwise indistinguishable in their manifestos from Thatcherite neo-liberals. In Holland, the charismatic Islamophobic firebrand Geert Wilders, leader of the Party for Freedom, bases his political narrative on a defence of liberal freedoms from what he sees as despotic Islam. And the fact is that, though many will find his hostility to Islam insulting, otherwise he is authentically a Dutch liberal in his ideological views.

Thus the so-called far right in Europe is far from monolithic, and in many ways is not necessarily far right beyond its attitude to immigration. This surely indicates that an anti-immigration stance ought no longer to be labelled “far right” at all. To be concerned by immigration ought not to taint the average voter with racism. Surely it would be better for Europe’s centrist governing coalitions and parties to develop a sensible and robust immigration policy, instead of carping about far-right extremism while opening the floodgates to a wave of mass immigration from very different cultures, which European societies will struggle to absorb, and which aside from culture shocks will place intolerable strains on their generous welfare systems.

European leaders such as Angela Merkel have so far merely aggravated the crisis with what amounts to an open door policy. This simply encourages more migrants, empowers networks of criminal people smugglers, and strains to breaking point the resources and political willpower of front-line EU member states like Italy and Greece.

Furthermore, though there are undoubtedly many victims of war arriving on Europe’s shores, these appear to be far outnumbered by economic migrants, drawn by the chance to work in the grey or black economy, and largely both young and male. To give Merkel and others their due, they are motivated by compassion, but they are also hamstrung by the inability of the EU to keep out refugees and immigrants, and by the plain fact that Africa and the middle-East are poorer and more dangerous than Europe, and everyone living there who owns a smartphone knows it. It is preferable, think Europe’s leaders, to welcome new arrivals and spread them about through a quota system among the member states, the better to share the burden, and the more, of course, to aggravate the electorates in those countries cajoled by EU diktat into receiving their share. It is no coincidence that anti-EU sentiment is on the rise at the same time.

But Europe’s governing centrist parties will pay for it at the polls as mainstream European electorates correlate rising crime, vagrancy and social tension with the immigration crisis. Gang violence with guns and grenades is already a regular feature of Sweden’s immigrant-stuffed ghettoes. Germany has seen at least one mass attack on unveiled women by young Muslim men in Cologne. The wave of terrorism two years ago, rightly or wrongly, was equated with immigration. The bottom line is something that liberals always hesitate to admit – that mass immigration from very foreign cultures does indeed lead to social tension and a rightist reaction. To neutralise the far-right, and to save the cherished principle of free movement (already being violated by, for example, hard borders reappearing in Austria and Sweden) European governments sooner or later must come up with a strong, pan-EU policy that discourages and prevents immigration.

But how? This is where the immigration crisis has enormous ramifications for EU integration, because in order for any immigration policy – even an open door policy – to be effectively regulated and enforced, the EU’s powers must be made to encroach far further into the traditional sovereignty of the nation-state.

A uniformed EU border force, a pan-European immigration and nationality enforcement body which goes beyond just the cooperation of national police and immigration services, a body of law to back up that force: these are the innovations that the EU must generate if the immigration crisis is not to shatter European unity and destroy the principle of free movement. Yet they require treaty changes that will place EU competence deep within one of the last preserves of national sovereignty – defence and security. Just as the EU must, one day, have a far more unified taxation and fiscal policy if the single currency is to survive, so they it must one day have a uniformed coercive agency, with the EU stars on its epaulettes, if the union itself is to continue in its current form. The EU now needs to integrate far more deeply just in order to survive. The stability of post-War and post-Cold War Europe is at stake, but the very measures needed to address these crises will themselves infuriate nationalist elements in all countries. It is possible that the cure for the far right will give more oxygen to the far right. But be that as it may, the EU must one day become a full federation if it is to exist at all.

This is something that Remainers in the Britain will never say openly: that if the UK were to rejoin the EU, it would be rejoining a union which, if it is to have a future, will by necessity erode national sovereignty far more than the centre ground of the British electorate and the political class would ever be willing to tolerate.