Skip to content
Cranleigh School Blogs / Politics Department Blog / UK Politics / Would a no-deal Brexit be such a disaster for the UK? 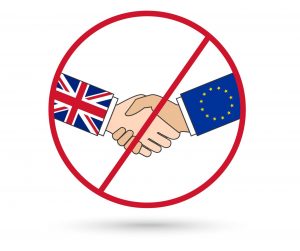 Both Eurosceptics and pro-Europeans were left dissatisfied, many even outraged, after Theresa May’s Chequers deal, a draft of the Brexit deal to be put forward at the coming negotiations. As Mrs May tries to straddle the divide between ‘leavers’ and ‘remainers’, the Conservative Party remain as divided as before the Referendum, which David Cameron had hoped would finally bring peace to the party. With so much disapproval at home, the prospects of a no-deal appear ever more likely when it comes to putting the draft forward at Brussels. Meanwhile, the clock is ticking as the 29th March deadline looms ever closer.

Despite many talking of the chaos that would ensue if no agreement was reached; the M20 being almost at a standstill with the rigorous checks on each vehicle coming into the UK, the state of
imprisonment in which everyone is stuck in the country since the planes won’t be able to fly, trading going out the window – in reality the government will have a year to sort these details before we leave and the EU will not risk the destruction of trade and tourism. Former Brexit Secretary David Davis said that “Europe does not want no deal” and within this it must be seen that Europe, as much as us, still want a strong relationship with the UK, for the purpose of security as much as anything else.

Even more than our relationship with the EU most likely remaining intact, the UK would no longer have to pay the £39 billion divorce bill and the reasons of many voters’ decisions to “leave” would most likely be obtained. The UK would keep control over its borders as no immigration agreements would have been reached. Moreover, parliament would once again become sovereign – free of all EU laws and regulations.

The public have been led to associate a no-deal Brexit with a Europe-UK relationship more complicated than that of Theresa May and Boris Johnson. Behind the surface, however, both the EU and the UK are already preparing for this in order to maintain peace. As May said: “no deal is better than a bad deal”. Businesses will also be at the top of everyone’s’ priorities, even now the Federation of  German Industries is already preparing for any possible Brexit outcome.

When it comes down to it, “rushing the negotiations” as Labour Leader Jeremy Corbyn wants in order to ensure a deal would turn out much worse than spending a year sorting through the details of the UK and Europe’s relationship, both of whom want to remain amicable for their own sakes.