Skip to content
Cranleigh School Blogs / Politics Department Blog / UK Politics / Would a no deal actually be a disaster?….Yes 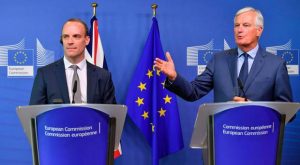 Ah, Brexit, that wonderful debate that has soured our screens and plagued our papers for over two years now. Surely Brexit it is just simply leaving an institution.   Does it really require such a long period of discussions, a designated minister and a change in Prime Minister? Given all the debate surrounding how “good” our eventual deal will be which declares our severance from the European Union, many have voiced the idea that maybe a “no deal” outcome may be the most realistic and in fact the most optimal outcome at this stage.

The plan for a no deal has started being discussed in parliament with the briefing sheet for “Operation Yellowhammer” being circulated on Tuesday last week and the front sheet being exposed, via a leak, to the public just two days later. This suggests that the no deal option is being extensively explored by the Government.  We are fast approaching March 2019 when the UK is due to leave the EU and the closer we get to that point without a deal the more precarious the situation because when we leave as there will be less time for institutions to plan for whatever outcome is reached with the EU in March 2019.

The benefit of a no deal would be that it would be easy to reach and would provide immediate clarity for all businesses and institutions.   It would also allow the UK to begin preparing for life outside the EU single market in the form of negotiating new trade deals and it would result in the UK having no legal obligation to pay the EU as part of a financial settlement.

However the main caveat to these points which makes a no deal very unattractive is the loss of a single market.   Firstly, if we negotiate well, there is the possibility of the UK leaving the EU with new trade deals; however these will likely be far worse than what we had before as part of the EU customs union. Secondly, we have the situation where we have 1.3 million UK nationals living in Europe and over 3 million EU nationals living in the UK.  What will happen to them?  Will they now become subject to stricter domestic immigration rules?

At this point, a no deal appears to be very bad idea.  There is still enough time to strike a far better deal with the European Union.